Wildlife Collisions: What to Do if You Hit an Animal

Would you know what to do if you hit a deer, moose or other wild animal—big or small? 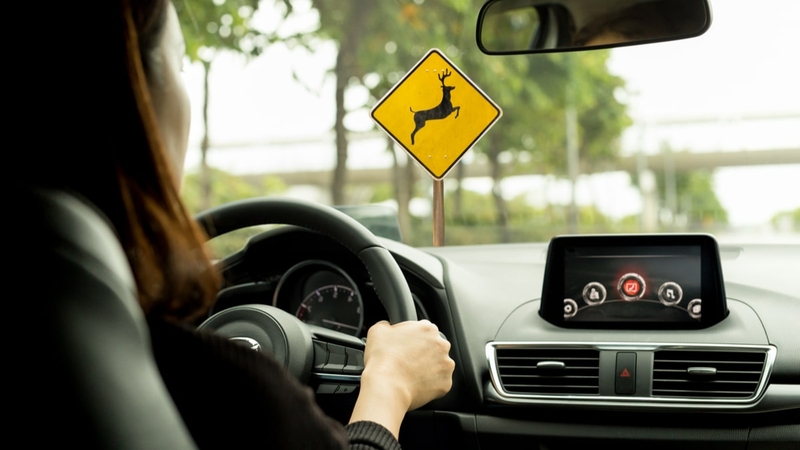 No one wants to hit a cute little animal on the road with a car, and you don’t want to hit a large one — it could lead to a life-threatening accident. In the very least, a collision with wildlife could cause damage to your vehicle.

Which begs the question: if you collide with a large animal such as a deer or moose, will your auto insurance policy cover you for damages?

If you do have the misfortune of hitting an animal, there will likely be damage to your vehicle. If you have collision and comprehensive coverages as part of your policy, you may be covered for those damages.

Collision covers your car if it’s damaged in an accident, while comprehensive covers you for non-accident related damage. Both coverages have a deductible.

In Ontario, if you hit a dead animal that’s lying in the road, your collision coverage may apply. However, hitting a dead animal comes with the expectation that you should have seen it and been able to safely avoid hitting it, meaning it may be regarded as an at-fault accident which can increase your premium. If a live animal darts out in front of you while driving and you hit it, your comprehensive coverage applies. It is considered a not-at-fault accident; therefore, it’s unlikely to affect your premium. The rules may vary by province.

Hitting an animal on the road is like any other accident where there’s been a collision. Pull over to a safe location and turn on your hazard lights. Your priority should be to check to see if anyone in the car is hurt and call emergency services if help is needed. If you need to get out of your car, stay off the road and be aware of oncoming traffic.

Compare and Save on Insurance Rates

When to Be More Aware of Wildlife

Roadkill tends to be seasonal.

For example, you’re more likely to collide with a deer or moose in October or November during their mating season, or in the spring after they’ve given birth when they’re actively out foraging for food with their offspring. Similarly, smaller animals such as racoons come out of hibernation as the temperature rises, sometimes a little dazed and confused. As a rule, fall and spring are the seasons where you need to be extra careful about hitting wildlife.

That being said, the summer months see animals out and about, especially in cottage country. Even in the city, you must be wary of small animals such as squirrels, racoons, and neighbourhood pets darting out on a side street.

While they’re less likely to damage your vehicle in a significant way if you hit them, you could have an accident when swerving to avoid them and end up involving another vehicle in the collision.

As for larger animals in less populated areas, many drivers don’t realize that in a contest between an average-sized vehicle and a bear, moose or elk, the animal is always going to win, even though it’s likely to die in the accident. The underbelly of a moose, for example, can take the roof of a car clean off, and it’s fatal for the car’s occupants.

According to the Ontario Provincial Police, more than 14,000 collisions with wildlife are reported annually in the province, which is the highest amount in Canada.

How to Avoid a Collision with Wildlife

If you think it’s unlikely you’ll hit an animal with your car, think again. It’s estimated that every hour in Canada there are between four and eight car accidents involving large animals. Factor in the smaller ones running cross urban and country roads and highways and being on alert for wildlife is ultimately part of being a responsible driver.

The Traffic Injury Research Foundation created the Wildlife Roadsharing Resource Centre to offer guidance as to how to navigate the roads as to avoid a collision with wildlife, as well as what you should do if a collision becomes unavoidable:

If you do encounter an animal on the road, stay calm. Take your foot off the gas and gently brake. Use your hazard lights to alert the cars behind you there’s something up ahead, be careful when using your horn, as it could startle the animal and prompt to flee into traffic or charge your vehicle.

Even if you’re especially careful, it’s still possible to end up in a collision with an animal. As a rule, you should resist the urge to swerve because it could make matters worse. You might lose control of your car, hit other vehicles, or even pedestrians or cyclists.

If an accident with a large animal is unavoidable, try avoiding a direct collision to lessen the impact. Aim to graze the animal instead by taking your foot off the gas, carefully braking, and keeping a firm grip on the steering wheel.

What to Do if You Have a Collision with Wildlife

Depending on where you live, you may be required to contact police, even if there are no injuries. If you strike a large animal, or if another vehicle was involved in the collision, you will need to report it. In the very least, police should be called if the animal is injured, blocking traffic, or is creating a hazard for other drivers.

As for your vehicle, be sure your car is drivable before leaving, even if the damage seems minimal, by scanning it for leaking fluid, broken lights or other signs of damage. If there’s any indication that it’s unsafe to drive, call for a tow.

Also, it’s important to call your car insurance provider as soon as possible after the accident should you need to file a claim.

It is our pleasure to announce we are changing addresses: Kanetix.ca will…
[ read more ]
Kanetix Team Oct 8, 2020

A Senior’s Guide to Auto Insurance

Experience matters, and being a mature, experienced driver does have advantages. For…
[ read more ]
Liam Lahey Sep 30, 2020

Wildlife Collisions: What to Do if You Hit an Animal

Will My Auto Insurance Policy Cover Me for Delivering Food?

Get in touch online

Send us a message